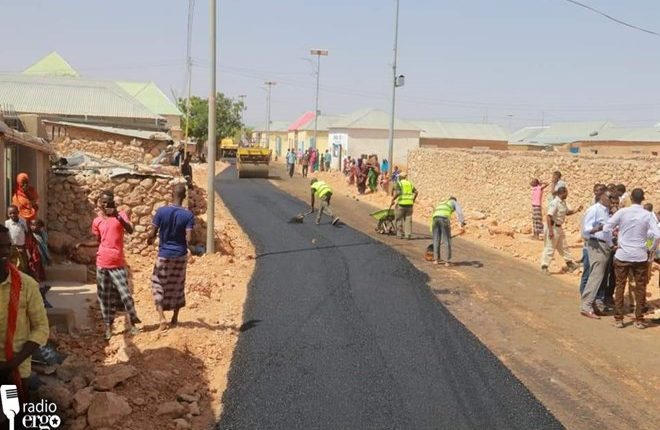 (ERGO) – Jama Haruse Mohamed’s wholesale food store is serving customers day and night now that the main road in Galkayo in the heart of Somalia’s Mudug region has been paved and fitted with street lighting.

Local residents and businesses raised money to support the local authority in the road rehabilitation project. Jama contributed about $700 and feels it was well worth it as his business has improved.

“When it rained the road became impassable for vehicles. The street also had no lights, so at night no one would dare come to the area because it turned into a den of thieves and drug users,” he said.

Jama and others endured the appalling road conditions for more than 15 years before they decided act.

“Our businesses are by the road, so we depend on passing pedestrians and cars stopping to buy food or exchange currency with us,” Jama told Radio Ergo.

Mohamed Abdinasir Igal, vice-commissioner of Galkayo district on the Puntland side, said the rehabilitation began with locally raised funds and was completed with support from the Somalia Stability Fund (SSF). Solar lighting was installed along the entire length of the street by local NGO, Centre for Peace and Democracy.

“The rehabilitation of the road has helped integrate the two sides of the city. Little traffic was flowing across the green line separating the Puntland and Galmudug sides of the city, but now taxis and others go from one side to the other without any problem,” Igal told Radio Ergo.

Public transport drivers and owners have long complained about the traffic jams and poor state of the road.

Ali Mohamed Shire, a young father of six, is one of hundreds of young men earning a living driving a ‘bajaj’ three-wheeler taxi.

“The bajaj could not pass the street during the rainy season. Sometimes traffic was blocked for 15 or even 30 days, and this was hampering our business,” he said.

Ali normally makes eight to 10 dollars a day but when the traffic snarled up he would often be forced to live on credit.

Igal, the vice-commissioner of Galkayo, Puntland, said the first phase of the rehabilitation was nearing completion and the second phase would start sometime next year.

“The road benefits the whole community, so I encourage everyone to participate and contribute towards the road project,” he said. “Street-front businesses should take extra responsibility for keeping the road proper, and the local authority is ready to play its part too.”