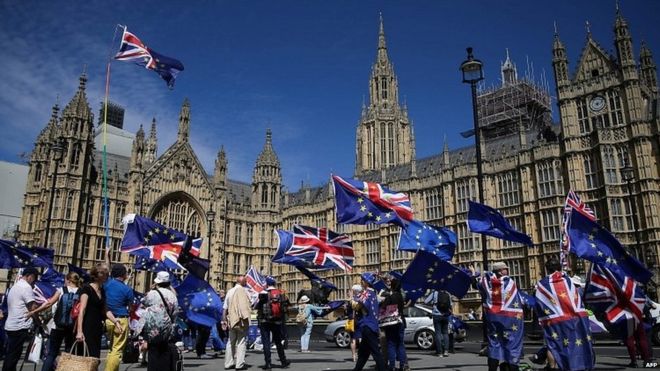 The House of Lords cannot be allowed to “undermine” the UK’s exit from the EU, Brexit Secretary David Davis has told MPs.

He was speaking as he opened two days of debate on the EU Withdrawal Bill.

Conservative MPs have been urged not to rebel against the government’s attempts to kill off Lords amendments.

But the government was hit by a resignation ahead of the votes, with Phillip Lee saying Parliament was being sidelined.

The justice minister announced he was quitting over the Brexit strategy being pursued and that he could not support “how our country’s exit from the EU looks set to be delivered”.

Mr Davis told MPs the bill’s “primary purpose” was to ensure a “functioning statute book” on the day the UK leaves the EU, 29 March 2019.

The most tightly-contested amendment is expected to be a call for Parliament to decide what happens next if it does not like the UK-EU Brexit deal.

The first votes are expected to happen from 16:15 BST.

Phillip Lee has been a junior justice minister since July 2016, having first been elected as the Bracknell MP in 2010.

Explaining the reasons for his resignation, he cited the government’s opposition to the “meaningful vote” amendment, saying this position “breaches fundamental principles of human rights and Parliamentary sovereignty”.

He also raised concerns about the economic impact of leaving the EU, saying Brexit had turned out to be much more complicated than first thought.

The UK should “pause, extend or revoke” the Article 50 process which formally triggered its departure from the EU, he said, calling for another referendum once ministers’ chosen path becomes clear.

Pro-EU campaigners hailed his resignation as significant in their calls for a referendum on the UK and EU’s final Brexit deal.

Mr Duncan Smith said the amendment giving more power to Parliament would be “disastrous” and allow the House of Lords to “block the whole passage of Brexit”.

It would mean ministers “must follow any direction” set by a House of Commons motion if Parliament rejects the final Brexit deal or negotiations run out of time.

The government says this would bind the UK’s hands in the negotiations.

Speaking on BBC Radio 4’s Today programme, Mr Davis said a Parliamentary vote on the Brexit deal did not give “the ability to reverse the decision of the referendum”.

Asked what would happen if MPs rejected the deal, he said there would be no time to restart negotiations, with the UK leaving the EU in March 2019.

Rebels have dismissed the government’s amendment, a commitment by ministers to make a statement within 28 days should MPs vote down the package negotiated by Mrs May.

A showdown over customs seems to have been averted after a compromise amendment was accepted by the government – which means it has agreed to report to Parliament by October on efforts to negotiate a “customs arrangement” with the EU after Brexit.

The fallback position has won the backing of a cross-section of leading Tory MPs on either side of the Brexit argument, avoiding for now a showdown over calls – backed by the House of Lords earlier this year – for the UK to remain in a fully-fledged customs union with the EU after it leaves.

Mr Davis said a “great deal of progress” had been made in negotiations, saying he was expecting both a withdrawal agreement and the “substance” of the UK and EU’s future relationship to be finalised in October.

He also described as “nonsense” reports he threatened to resign over the wording of last week’s “backstop” plan to avoid border checks in Northern Ireland.

A big week for Brexit

The EU withdrawal bill is the legislation aimed at ensuring the UK has a smooth transition out of the EU, and will mean EU law is no longer supreme in the UK.

To avoid a sudden “cliff edge” on Brexit day, 29 March 2019, it would also convert existing EU law into UK law so the government and Parliament can decide at a later date which bits they want to keep or change.

The House of Lords has put forward 15 specific changes to the bill, but the government wants to kill off most of these changes.

However, numbers in the House of Commons are finely balanced, with the Conservatives not having a majority and needing the help of Northern Ireland’s Democratic Unionist Party to get their way.