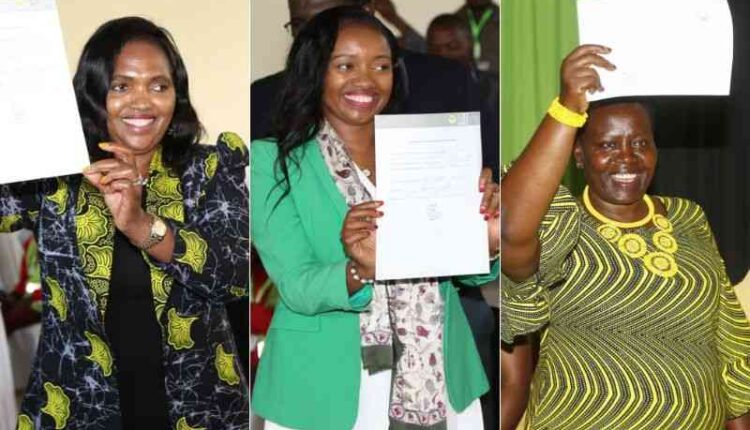 Nakuru now becomes one of two counties with three women at the top leadership, setting a never-seen before trend. The other county is Machakos, led by governor-elect Wavinya Ndeti and Senator-elect Agnes Kavindu.

Nakuru also has the highest number of MPs so far, in the just concluded August 9 General Election.

Kihika of UDA defied the odds to defeat the incumbent governor Lee Kinyanjui, after garnering 440,707 votes against Kinyanjui (Jubilee party) who got 225,623 votes.

In her victory speech, Kihika expressed gratitude to the Nakuru electorate for believing in women’s leadership.

“I want to thank the people of Nakuru County for being progressive and electing three women to the leadership of this county,” she said.

She also thanked her husband, Sam Mburu, whom she acknowledged as a big part of her success.

“I take this chance to thank my husband Sam Mburu. He has really supported me. You all know that I am quite a fire ball so it may not be easy to put up with me but I thank him for being a supportive and patient man who has supported me through this political journey where propaganda is so high,” Kihika said.

Her shoes as outgoing Senator will now be filled by businesswoman Tabitha Karanja of Keroche Breweries.

Karanja, who also vied on a UDA party ticket, won with 442,864 votes against her main competitor Lawrence Karanja (Jubilee) who managed 163,625 votes.

“This is the first county that has elected a majority of women and we will not let down the women of Nakuru County. We will prove to the world that women can do better than what men can do,” Karanja said.

Karanja has expressed gratitude to the Nakuru electorate for the opportunity they had accorded her to serve them.

“I will not let you down and will ensure that resources are used to benefit the Nakuru people,” she said.

Liza Chelule, the incumbent Nakuru Woman Representative, retained her seat after garnering 382,143 votes against Agnes Njambi of Jubilee Party who got 194,610.

Nakuru Governor Kihika Outlines Manifesto As She Is Sworn In

Nakuru Governor Kihika Outlines Manifesto As She Is Sworn In

Thank you very much Nakuru County