The Central Asia summits that show Washington is losing grip 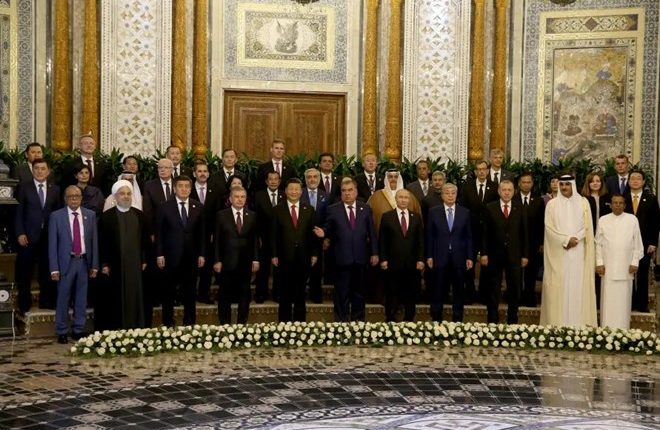 Kyrgyzstan and Tajikistan host Russia, China, Iran for two important summits that showed how US is losing influence to other world powers

If one wanted to see what a world without US influence looks like, you could have been an observer at the Shanghai Cooperation Organization’s summit in Bishkek on Friday, and then gone to Tajikistan’s capital Dushanbe the next day for the Conference on Interaction and Confidence Building Measures in Asia (CICA).

Together, these summits include more than 30 member and observer states and provided a forum for an emerging alliance of Russia, China, Turkey and Iran to discuss regional and global issues without Western powers present. This is important because all of these countries, for different reasons, have faced challenges from Washington in recent years.

Russian President Vladimir Putin and Chinese President Xi Jingping met on Friday with leaders of Central Asian states, as well as India and Pakistan, to discuss regional and global issues. They adopted the Bishkek Declaration that sought to emphasize the need to fight “three forces of evil,” including separatism, terrorism and extremism. Russia’s Tass News Agency felt this was important to note. In addition, the countries are working to challenge “cross-border crime” and “build a multi-polar world order.”

“Multi-polar world order” is aimed at contesting US global leadership after decades where the US was a hegemonic global superpower. No more, perhaps, if the SCO meeting is any indicator. Besides China, Russia, India and Pakistan, the neighboring countries of Kyrgyzstan, Kazakhstan, Tajikistan and Uzbekistan were also in attendance. In addition, the SCO had observers from Afghanistan, Belarus, Iran and Mongolia.

It is the 19th annual summit of the group, whose members sought to sign a road map for cooperation with reconstruction in Afghanistan. The US is trying to end a 19-year civil war there through a deal with the Taliban. The SCO might be entering the country as the US reduces its influence.

While Russia and China sought to increase regional cooperation, Iran used the SCO meeting to slam the US. Iranian President Hassan Rouhani told the summit that the US has been “violating all the international structures and rules and using its economic, financial and military resources, has taken an aggressive approach, and presents a serious risk to stability in the region and the world.”

Coming a day after Washington accused Iran of attacking two tankers, this shows how Iran was seeking to portray the US as a world pariah to an audience that might be more receptive. The next SCO summit will be held in 2020 in Russia.

Rouhani held a meeting with Putin to discuss economic ties, according to Press TV in Iran. Iran said relations were on a “good pace,” and that there is a joint Iran Russia Commission for Cooperation taking place in a week in Iran. The US has sought to put sanctions pressure on Tehran. Iran’s message was that this isn’t working.

In Tajikistan on Saturday, Chinese President Xi Jinping urged new efforts on security and development among the participating countries in Dushanbe. The CICA meeting was important for Iran, Turkey, Qatar and other countries. Erdogan met with Rouhani, Jinping and Qatari Emir Tamim bin Hamad al-Thani.

Turkey used the CICA meeting to condemn US actions recognizing Jerusalem as the capital of Israel. Iran used the meeting to warn that it cannot remain inside the JCPOA – the Iran nuclear deal – if other countries violate it. “Other countries also need to pay their share to save this important agreement,” Rouhani said.

Qatar met with the Iranian leader on Saturday and emphasized the importance of dialogue. It was one of several high-level meetings for the Qataris with Putin, Erdogan and China, according to photos published by the Qatar News Agency. Doha emphasized the importance of strategic bilateral relations with Turkey and bilateral relations with the other countries. India said at the meeting that terrorism represents the “gravest threat” to the world.

The meeting appeared to be particularly important for China and Russia. Press TV in Iran reported that President Xi Jinping celebrated his 66th birthday with Putin. They exchanged tea and ice cream. The next meeting of CICA, which includes 27 countries, will be held in 2022.

These two meetings over the weekend show the degree to which US influence is being both challenged and weakened as China, Turkey, Russia and Iran sense a future that revolves more around Central Asia, and less around Europe and the US. The US has slapped tariffs on China, sanctioned Iran, threatened Turkey over an S-400 deal with Russia, and sanctioned Russia.

But the combined weight of these economies and the populations of these countries have ramifications for the US. Each of these countries also have its own concept for the future, whether it is China’s Belt and Road Initiative or the Turk Stream pipeline between Russia and Turkey. Some of the handshakes at Bishkek and Dushanbe may have been symbolic, but many of them represent important meetings aimed at challenging the US and its allies. They also represent a consensus on fighting terrorism as well as building a multi-polar world order for the 21st century.