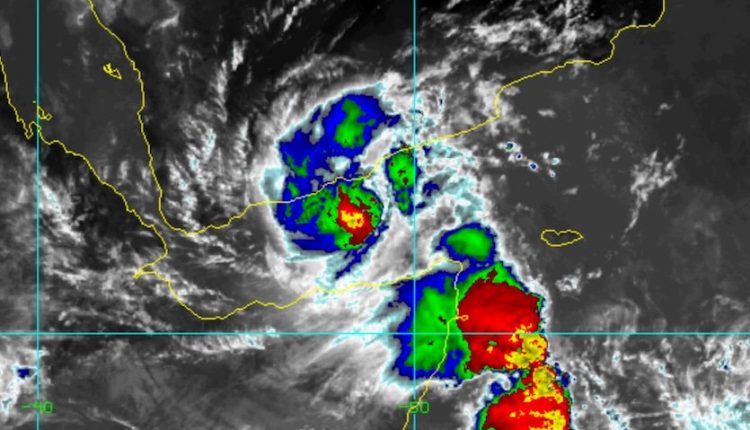 Tropical Cyclone 1A, which developed late Wednesday between Yemen and Somalia, could become one of the first tropical storms on record to cross the entire Gulf of Aden—perhaps affecting even the tiny nation of Djibouti, where tropical cyclones are virtually unknown. TD 1A was named Cyclonic Storm Sagar by the Indian Meteorological Department, the agency with primary responsibility for tropical cyclone forecasting in the North Indian Ocean, including the Arabian Sea.

As of 3Z Thursday (11 pm EDT Wednesday), the center of Sagar was placed at about 260 miles east of Aden, Yemen, by the Joint Typhoon Warning Center. The JTWC pegged Sagar’s strength at 40 knots (45 mph), qualifying it as a weak tropical storm. Showers and thunderstorms pinwheeling around Sagar’s compact core were moving onto the Yemeni coast early Thursday, while a cluster of intense thunderstorms well southeast of Sagar was affecting northeast Somalia (see image above).

The main threat from Sagar will be heavy rainfall. The GFS model indicates that the highlands of northern Somalia could see localized rainfall of 10” or more, with totals perhaps exceeding 2” across other parts of northern Somalia and along the Yemeni coastline. Even those lower amounts are substantial totals in desert environments that don’t typically get much moisture, and where the rugged landscape is prone to flash flooding.

In a special advisory issued on Wednesday and placed online by reliefweb.org, the UK Met Office warned that “severe flash flooding and river flooding across the region will lead to a loss of human life, livestock, and the destruction of crops, property and infrastructure.” The Met Office added: “Very heavy rainfall occurring across Western Yemen (linked to, although not directly from the cyclone) is likely to promote cholera infection rates in the weeks ahead.”

All the way to Djibouti? It’s not out of the question

Threading the needle of the entire Gulf of Aden as a tropical cyclone would be a remarkable happening, but Sagar may do just that. The storm is traversing very warm sea-surface temperatures of 29-30°C (84-85°F), which is close to the seasonal average. Wind shear is predicted by the GFS model to remain light (around 10 knots) for the next day or two. These favorable factors should help Sagar to make the most of its constrained environment, perhaps allowing it to intensify into a moderately strong tropical storm. At the same time, land interactions could easily weaken Sagar if the center moves over or near the coast of either Yemen or Somalia.

As of 0Z Thursday, both the GFS and HWRF models track Sagar toward the west-southwest through Friday, a course that could allow the storm to traverse the entire Gulf of Aden. The HWRF projected a slightly more northerly track that would lead to a tropical-depression or tropical-storm landfall in the tiny nation of Djibouti around Saturday, while the more southerly track of the GFS would keep more of the storm’s core over water before a landfall in far eastern Somalia. The JTWC’s forecast in Figure 1 is similar to that of the GFS.

Tropical cyclones are most common in the Arabian Sea in spring and autumn, during the transition periods between the strong southwest flow of the summer monsoon and the strong northeast flow that predominates in winter. There are signs that pre-monsoon (springtime) Arabian Sea cyclones have gotten stronger in the last 20 years, as we discussed in a 2015 post on Chapala.

The region’s strongest tropical cyclones on record both occurred in November 2015. Cyclone Chapala came ashore on the south end of the Arabian peninsula on November 4 as the first hurricane-strength cyclone ever recorded in Yemen. Just four days later, Cyclone Megh passed just north of Socotra Island east of Somalia with Category 3 winds of 110 mph, destroying hundreds of homes and killing at least 18 people. Megh grazed the north tip of Somalia before making landfall in Yemen as a weak low.

The Glam Hijabi: The incredible beauty tricks I learnt from my Somalian mother