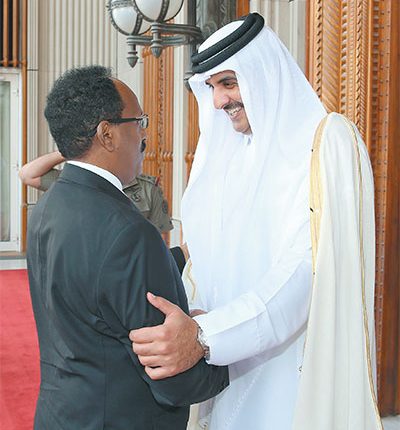 Highness the Amir Sheikh Tamim bin Hamad al-Thani today meets the visiting Somali President Mohamed Abdullahi Farmajo to discuss the distinguished fraternal relations between the two brotherly countries besides Arab and international issues of common concern.
This is the Somali president’s second official visit to Qatar within a year.The meeting between His Highness the Amir and the Somali president is the third in less than a year. The two leaders met on the sidelines of the OIC summit in Istanbul last December. They also met during an official visit to Doha by President Farmajo in May 2017.
The visit is particularly important in its timing and the topics to be discussed during the talks between the Qatari and Somali sides.

The visit comes at a time when almost one year has passed since the unjust siege was imposed on Qatar.
Developments and events as well as this visit and other visits of many leaders and presidents to the country proved the failure of the siege in isolating Qatar from its regional environment and strategic depth.
It further proves the failure of its parties in convincing others to support, join or partake in the siege, which confirms the credibility of the Qatari position, and the success of the wise policy of His Highness the Amir and Qatari diplomacy in refuting the lies and fabrications repeated by the siege countries in various forums.

The visit is also important because of the nature of the topics to be covered by the Qatari-Somali talks, which are expected to address the most important current Arab and international issues in light of the escalating international and regional crises and the economic and security challenges in Somalia, as well as the risks to security and stability in the Red Sea and Horn of Africa. The visit comes almost a year after the election of President Farmajo as Somalia’s new president in February last year.

President Farmajo succeeded in leading his country towards stability, development and rehabilitation of state institutions. In co-operation with the members of his Government, President Farmajo has made major changes as well as many great and unprecedented achievements to restore state’s authority and realise the aspirations of the Somali people in various fields. There is no doubt that the visit will be an occasion to review the progress achieved by the Somali government in the process of construction, reconstruction and rehabilitation in addition to its needs to continue and complete this process in the coming stages.

The relations between Qatar and Somalia have been strong for many years.
These relations have been and shall continue to enjoy the full support of the leaders of the two countries in their keenness to develop bilateral co-operation in the trade, economic, investment, culture and other fields.
The talks between the Qatari and Somali sides are expected to discuss ways and means to strengthen these relations to serve the interests of both countries and peoples and their common aspirations for a bright and prosperous future.
Qatar plays an important role in supporting and implementing many vital projects in Somalia. In this context, Doha has always associated its statements with deeds as testified by senior officials of Somalia.
Qatar supported the Somali brothers in all stages of their ordeal, and supported, with all material and moral means, the steps of Somalia on the path of national reconciliation, the reconstruction of the country and the rehabilitation of State institutions.

In November 2017, Qatar Fund for Development (QFFD) signed a partnership agreement with the Somali government aimed at strengthening its efforts in the area of stability and economic development.
QFFD pledged to support the Somali economy through a $200mn package of projects in the areas of infrastructure, education, economic empowerment and the re-establishment of state offices and institutions.

The projects also include a memorandum of understanding (MoU) to support education programmes in Somalia between the QFFD and the Education Above All Foundation.
This MoU is part of Qatar’s commitment to Somali government and people.
It is a continuation of a series of development projects between the two countries covering several developmental, humanitarian, charitable and cultural fields in all regions of Somalia.
Somalia has extensive investment opportunities in the livestock, agriculture, mining, sugar and salt sectors, as well as fisheries, which are important economic sectors because of Somalia’s long coastlines on the Indian Ocean.
Somalia’s most important wealth and exports are agricultural products, livestock, fisheries, coal, uranium, some minerals, salt and natural gas. It also has some oil reserves.

There are existing industries in Somalia such plastics, fish canning, meat processing and sugar.
Among the most important imports are industrial and petroleum products, foodstuffs, medicines, building materials, cars, light and heavy equipment, electrical and electronic appliances, household appliances and clothing.
Although the federal government is doing great efforts to improve the economy, the economic situation in Somalia remains fragile.

However, the International Monetary Fund (IMF) believes that Somalia has made great progress in recent years.
IMF stresses that international support will be vital in the reconstruction of institutions and restoring normal life It is noted that there has been a rise in the growth of the Somali economy during the past two years after the entry of Turkish companies and investments, especially in the management and operation of Adam Uday International Airport in Mogadishu and the management and operation of the port of Mogadishu.

Through established constants and Qatari commitments to support of brothers and friends, it is possible to say that President Farmajo’s visit to the country will be an opportunity to explore the horizons of co-operation between the two countries in various fields.

It will also be an occasion to renew Qatar’s commitment to supporting the Somali people and government and to continue to provide material, humanitarian and development assistance and support for the establishment of a stable State and sustainable development that will enable Somalis to live in security, peace and prosperity.