Raila’s message to youth as he celebrates 77th birthday 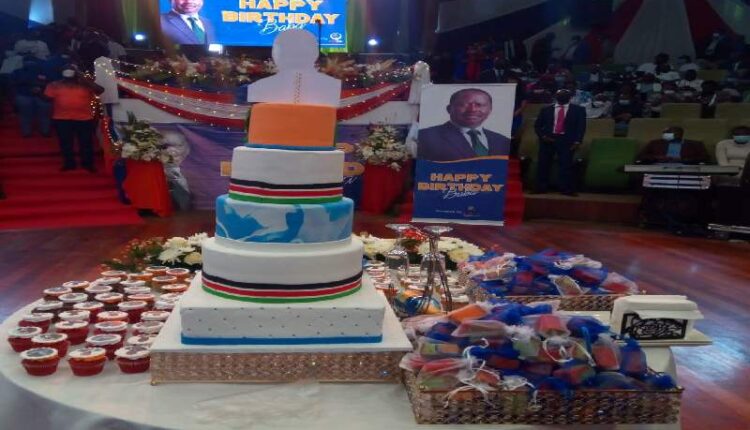 It was all pomp and colour at the Bomas of Kenya as ODM Party leader and Azimio la Umoja presidential aspirant Raila Odinga celebrated his 77th birthday.

The event capped celebrations that took place in all 47 counties. Raila arrived at the venue together with his wife Ida Odinga at about 11.30 am and proceeded to cut the cake at 11:47 am, with the timing symbolising the 47 counties.

His cake was five-layered with the four layers representing the presidencies of Jomo Kenyatta, Daniel Moi, Mwai Kibaki and the fifth representing his fifth quest to be Kenya’s president.

In his speech, Raila urged the youth to back him for the country’s top job, saying if elected, his administration will respect the youth.

“My administration will respect everyone and there will no discrimination,” he said.

Raila said that the people who fought for independence were mainly young people. “We have a new constitution but it has not achieved the vision our forefathers had for this country,” he said.

He said the focus on the general election should be about the issues affecting Kenyans. “The revolution will be about liberating Kenya economically.”

Raila said Kenya needed the willpower to implement Vision 2030 which he said will transform the country economically.

He said that the country needed a well-travelled and experienced leader to move Kenya forward and he is the best bet.“We know where we are coming from, where we are and where we want to go.”

He said the August 9 election will be the day of transformation for Kenya. “That day we will lay the foundation to transform this country and in five years’ time I can promise you a different Kenya,” he said.

The celebration of his birthday coincided with the launch of the Azimio la Young Turks, a movement of young men and women who will campaign for him all over the county.

He said the movement is anchored on humanity, brotherhood, unity, equality and productivity which he says is what Kenya needs to move forward.

“I have been the Prime Minister for five years, I know where the money is,” he said while promising to seal loopholes that he says the corrupt have been exploiting to steal from Kenyans.

He took a jibe at UDA Presidential candidate William Ruto questioning where he gets the money that he donates in harambees yet his salary was just Sh2 million.

The event was attended by elected leaders from ODM, Jubilee and other dignitaries.