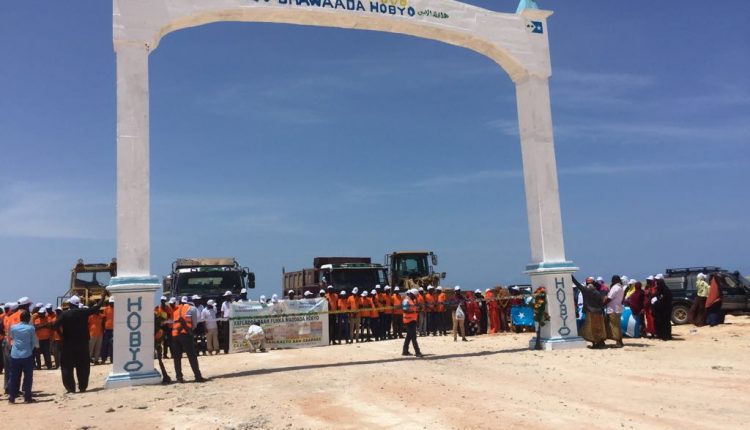 English: Hobyo also called Obbia is an ancient harbor city in north east Mudug Galmudug State region of Somalia. Hobyo closely means “here water” the fresh water wells in and around the town and area of its surroundings.

Hobyo’s history began as a place for sailors and caravans to get fresh water and necessary supply and became a town of importance when the Muslim pilgrims departing for Mecca on their Hajj and the sea captains who would take them there began favoring the town as a point of departure because of its fresh water as well as other necessities for sea and land movements which later led to Hobyo becoming a commercial center. Laterdays Hobyo becomes one of the main bases of Ajuuraan Sultanate empire. Hobyo was the commercial centre of the Ajuuraan Sultanate, based in Qalafo Ogaden. Commercial goods harvested along the Shabelle River were brought to Hobyo for trade.

Once again Hobyo become a birth place of the Hiraab Imamate The Hiraab imamate was a powerful alliance of closely related groups who shared a common lineage under the Gurgarte clan divisions. The alliance involved the army leaders and advisors of the Habar Gidir and Duduble, a Fiqhi/Qadi of Sheikhal,. Once established, the Imamate ruled the territories stretching from Kismanyo, Mogadishu to the port town of Hobyo. The commercial goods harvested along the Shabelle river were brought to Hobyo for trade. Also, the increasing importance and rapid settlement of more southernly cities such as Mogadishu

The port town Hobyo served as strategic political and commercial centre both Ajuran Sultanate Empire and the Hiraab Imamate. Hobyo is famous nowadays with fishing, herds of camels, cattle, goats and sheep. Livestock, hides animal skin, and other foods.