IS SOMALIA READY FOR A ONE-PERSON ONE-VOTE ELECTION? 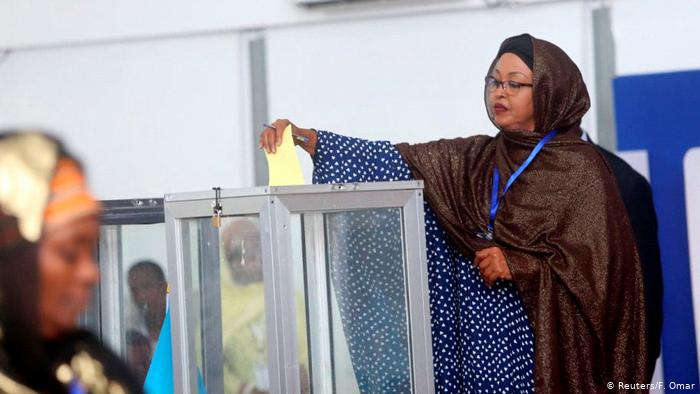 It’s been 50 years since Somalia last conducted a “one-person one-vote” election. With the support of the African Union the electoral commission is hoping for polls in 2020. But there is still much that needs to be done.

“I request parliamentarians in this workshop to advocate for ‘one-person one-vote’,” Halima Ismail Ibrahim, chairperson of the National Independent Electoral Commission of Somalia (NIEC), urged Somali lawmakers on Saturday.

Together with African Union (AU) officials and members of the African Union Mission in Somalia (AMISOM), Somali officials and advisers gathered in the Ugandan capital to discuss security and ways forward to prepare for possible universal elections in 2020.

For Somalia, such an election would be the first universal suffrage polls in half a century. Somalia’s last universal vote was held in 1969, shortly before the coup that brought military leader Siad Barre to power. Following two decades of civil war and then rule by a transitional government, backed by the United Nations and the African Union, Somalia has slowly been inching its way toward universal polls.

Three previous presidential elections in 2009, 2012 and 2017 were decided in a system where lawmakers were voted in by about 14,000 clan delegates. The lawmakers then in turn elected a president. The clan-based election system has been widely criticized for marginalizing young people, women and ethnic minorities.

Yet both Somali and African Union officials hope that 2020 will be different. In December 2017, the NIEC launched a five-year plan to draft electoral laws, plan voter registration and work on setting up the right mechanisms to hold an election. Since then, 22 political parties have registered themselves for the polls. The electoral law is still waiting for approval from parliament.

“We are all aware that Somalia has not had this type of election for the last 50 years,” said Ssebirumbi Kisinziggo, AMISOM’s senior political officer. “The essence of planning, coordination and having a strategy in place is what we are working on at the moment.”

After years of civil war, Somalia’s transitional government and the current government under President Abdullahi Mohamed have struggled to contain the threat from the terrorist group al-Shabab , who have over the years controlled parts of the country.

“Somalia is still highly insecure,” explains Omar Mahmood, an Addis Ababa-based researcher at the Institute for Peace and Security Studies. “I don’t think there’s been a great change in the past year. We might even have some backsliding in certain areas.” While major urban centers could possibly be secured for the polls, people outside these areas would probably face difficulties voting or even traveling to the urban hubs.

NIEC chairperson Ibrahim admits that security is still a major concern for her electoral body.

“Without security you cannot conduct an election. We are doing now the verification of the voter registration centers and we want that our security sectors sit together and see where it is safe where it is not safe,” she told attendees at the workshop in Kampala. “[Security forces] have to direct us where NIEC will go, and without that election cannot happen.”

The preparations for the elections come at a difficult juncture. While AMISOM has been mandated to help the Somali government prepare for elections and to also provide security during the voting process, the troops are at the same time in the midst of cutting down their presence in the country.

“We envision that by 2021 Somali security forces will be ready to take over security responsibilities from AMISOM fully,” Francisco Madeira, special representative of the chairperson of the AU Commission and head of AMISOM, wrote in a guest column last week in the South African daily Mail and Guardian. He explained that the force had managed to withdraw 1,000 troops from the country, handing over security for facilities like the Mogadishu stadium, the university and military academy.

“The withdrawal process for AMISOM has been driven more by external funding considerations and less by conditions on the ground,” said Mahmood. “There is some donor fatigue creeping in, and that spurred a lot of thinking in terms of exit strategies.”

Uganda, the biggest contributor to the AMISOM force with 6,400 troops, has also been very critical of the troop withdrawal. In March, Ugandan President Yoweri Museveni threatened to take all Ugandan soldiers out of Somalia if the force was to be reduced even further. Burundian President Pierre Nkurunziza had previously made the same threat. AMISOM’s funding relies heavily on donor money coming through the UN, and the decision to scale down the operation came from the UN Security Council.

Observers have also warned AMISOM that the withdrawal could empower clan-based structures and it also provide an opportunity for al-Shabab to exploit the divides in the country’s political scene.

Obstacles along the way

Aside from security, there are still other obstacles that could pose a problem for Somalia’s election plans. Mahmood said there’s still a great amount of tension between Somalia’s federal state government and the member states.

“Many of the states are not working with Mogadishu,” he said. “This affects security relationships, political relationships, institution building, state building — the constitution is provisional, but there is supposed to be a finalization of it.” Without any cooperation between the states, very little progress can be made, he added.

Other obstacles include the right processes, the technical and logistical requirements that still need to be put in place before an election can take place. The hope is, that with AU backing, steps toward such requirements can be made in order to once again inch a little closer to a process in which all Somali citizens can take part.

“Successful elections,” Uganda’s electoral commission chairperson Simon Byabakama said at the Kampala meeting, “provide a foundation on which all the other major sectors like the economy, social progress and security can base their footing to realize progressive development.”