A first of its kind all-female media outlet has been launched in Somalia, seeking to amplify women’s voices and report on the rarely-discussed challenges they face on a daily basis.

Dubbed Bilan, meaning bright and clear in Somali, the media house consists of one editor and five journalists and will produce TV, radio and online content. It is based in the country’s capital Mogadishu and is part of the Dalsan Media Group, one of Somalia’s largest media houses. The outlet is being funded by the United Nations Development Programme (UNDP).

Nasrin Mohamed Ibrahim, Bilan’s editor-in-chief, has been a journalist for 12 years and is among the founders of the Somali Women Journalist Organisation. Ibrahim is Somalia’s first female editor-in-chief.

The establishment of Bilan comes against the backdrop of increased harassment of women in Somalia, including in newsrooms, which takes numerous forms, including denial of jobs, sexual assault, rape, denial of education and gender-based violence, among others.

Bilan is therefore seeking to provide a platform to discuss the challenges women face, celebrate women’s milestones and champion recognition of the rights of women.

“For too long, Somali women journalists have been treated as second class citizens and Somali news has ignored the stories and voices of half the population,” said Nasrin Mohamed Ibraham in a statement.

“Now we are in charge of the boardroom and the narrative,” she added. “Some people might not like the fact that I play football and lead a media team. But nobody will ever change my mind.”

The formation of Bilan was inspired by a six-month research by UNDP on the role of women in Somalia’s media.

Most of the journalists interviewed described undergoing harassment in the workplace, being disrespected by their male counterparts despite the positions they hold and being denied promotions.

“They are often denied training opportunities and promotions,” UNDP states. “And when a woman does reach a position of authority, she is often ignored while more junior figures get to call the shots.” 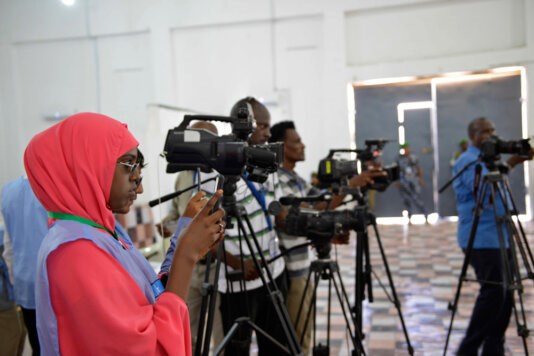 Set as a one-year pilot with plans to continue operations and scale it to other Somali regions, Bilan is training its journalists on key journalistic aspects. © rawpixel

BRINGING TABOO SUBJECTS TO THE FOREGROUND

The media house, which has been set as a one-year pilot with plans to continue operations and scale it to other Somali regions, is training its journalists on key journalistic aspects including video production, photography, sound editing, investigative reporting, media ethics, safety while reporting in the field and interviewing skills.

The journalists will also receive mentorship from respected Somali and international journalists.

Bilan has also introduced an internship programme for female journalists at Somalia National University and Mogadishu University. Those who qualify will be immersed in a six-month training programme at Bilan.

“As a women-only media house, we are going to be able to bring taboo subjects into the open,” said Fathi Mohamed Ahmed, Bilan’s Deputy Editor. “Our sisters, mothers and grandmothers will talk to us about issues they never dare speak about with men.”

In its bid to assist the media outlet grow its international reach, UNDP is working with international media platforms to cover the work of Bilan journalists. And to encourage the sharing of experiences and mutual learning, the UN agency is also looking to create networks where female journalists in Somalia can partner with journalists working in difficult areas like Afghanistan.

“We hope this will be a game-changer for the Somali media scene,” said Jocelyn Mason, UNDP’s Resident Representative in Mogadishu. Mason hopes the newsroom will open up “new opportunities for women journalists and [shine] a light on new subjects that have been ignored, particularly those that are important for women.”

Thank you very much Nakuru County