Mogadishu and the UAE must restore relations for the African Union mission’s successful exit from Somalia. 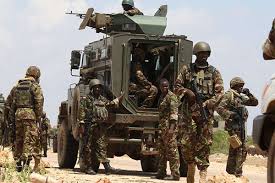 In early April, the United Arab Emirates (UAE) stopped its capacity building support for security institutions and humanitarian aid to Somalia. This was due to growing diplomatic disputes between the two countries. The move comes at a time when the international community, in the form of the African Union Mission in Somalia (AMISOM), is considering its exit by 2020/21.

How will the UAE’s withdrawal of its support affect AMISOM’s exit strategy? AMISOM has been in Somalia since 2007 with the mandate to support the government in restoring peace and stability. It does this by building the capacity of state security bodies and reducing security threats posed by al-Shabaab and other militant groups. AMISOM has worked in collaboration with other bilateral and multilateral bodies such as the UAE.

The UAE had been supporting Somali government institutions since 2011. It established and supervised the Puntland Maritime Police Force, constructed and commanded a military training centre in Mogadishu, trained hundreds of security forces and paid the salaries of 2 407 Somali government soldiers. The UAE also built the Sheikh Zayed Hospital in Mogadishu and has provided free medical services for roughly 300 patients daily.

However, the relationship has deteriorated. On 8 April, Somalia’s security forces intercepted a UAE plane and confiscated almost $10 million in cash at the airport in Mogadishu. This angered the UAE, which immediately ceased its support to Somalia. The UAE said the money was intended for training and to pay the salaries of Somalia’s state soldiers.

Relations between the UAE and Somalia have in fact been deteriorating since President Mohamed Abdullahi ‘Faramajo’ Mohamed came to power last year. His government resisted a request for Somalia to join Saudi Arabia, the UAE, Egypt and Bahrain in taking isolation measures against Qatar, amid accusations of the latter sponsoring terrorist groups.

Faramajo’s official position over the conflict among the Gulf States was ‘neutral’, but analysts noted his stance as pro-Qatar, because Turkey – Somalia’s ally and largest foreign investor – was behind Qatar, opposing the Saudi Arabia-led allies.

The conflict in the Gulf States created divisions among Somalia’s senior government officials. When Faramajo and his supporters sided with Qatar and Turkey, some government officials, especially in the Federal Member States, supported the Saudi Arabia-led allies. When the UAE suspended its humanitarian support in April, Qatar immediately donated 30 buses and two cranes to the Mogadishu city administration – making Faramajo’s pro-Qatar stance more obvious.

Mogadishu has also voiced its disappointment regarding the UAE’s engagements in Somaliland, a self-declared independent state since 1991, and Puntland, a semi-autonomous state. The UAE-based DP World has agreed with Somaliland and Puntland to develop and manage their Barbera and Bosaso seaports respectively. The UAE is also building a military base in Somaliland. These deals are seen by Mogadishu as violations of Somalia’s sovereignty.

All of this will affect AMISOM’s exit plan, considering the plan’s three conditions. These are: the availability and readiness of Somalia’s security forces to take over from AMISOM; progress in the country’s political processes; and improvements in Somalia’s security and weakening of al-Shabaab.

Meeting the first condition requires a stronger demonstration of local ownership and leadership by Somalia’s security forces, as well as sufficiently trained and equipped members. The role of the UAE in such capacity building was huge, despite accusations that some UAE-trained soldiers disobeyed Somalia’s army command structure. AMISOM will probably struggle to fill this gap before the planned exit time, as it has serious resource and funding constraints.

The impact of the dispute on political progress is also critical. Somalia is working to achieve universal suffrage for a “one-person, one-vote” election in 2020-21 that requires cohesiveness among all relevant actors in the country. With the souring of relations, the UAE could support groups standing against Faramajo and the Federal Member States, like Puntland.

The UAE’s withdrawal of its support and its potentially negative role could weaken the Federal Government of Somalia’s security forces and reverse the small gains that have been made in security. Al-Shabaab and other militant groups could use the dispute and the gaps created in the country’s security forces as an opportunity to strengthen their capacity. In doing so, they could remain a threat in Somalia.

Analysts have similar views regarding the impact of the diplomatic wrangle. Omar S Mahmood, researcher at the Institute for Security Studies, told ISS Today that the dispute “could complicate implementation of AMISOM’s exit plan, given that it’s dependent on the coherent development of a Somali security sector’. Commander Abebe Muluneh, head of the Intergovernmental Authority on Development (IGAD) Security Sector Reform Programme, says the impact ‘would force AMISOM to stay longer in Somalia, beyond 2020”.

The diplomatic dispute between Somalia and the UAE will have a multifaceted impact on AMISOM being able to exit as planned. If this happens, Somalia will remain fragile, and extremist militant groups such as al-Shabaab will use this to continue threatening the country’s stability. It is therefore essential that relations between Somalia and the UAE are restored through diplomatic means, so that the UAE’s support to Somalia’s security forces can be resumed and enhanced. DM

Why Saudi Arabia, Qatar and Turkey Are Battling Over Somalia

What is behind UAE’s military build-up in Socotra?