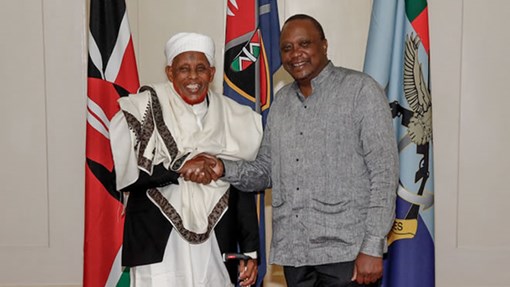 President Uhuru Kenyatta has underscored the need for countries in the region to nurture peace and unity, saying colonial boundaries should not be allowed to divide people.

The President said the region stands to achieve faster development if its people work together in peace and harmony.

“We need to live together as brothers and sisters and respect all communities in the region,” the President said.

The President was speaking at State House, Nairobi, on Monday evening during a meeting with King Abdile Wabar Abdi, the Ethiopian-based traditional leader of the Degodia community found in Kenya, Ethiopia, Somalia and Djibouti.

King Abdi, who was accompanied by a huge delegation of members of the Degodia community from Kenya and Ethiopia, delivered a message of peace and unity to the President.

Uhuru said cultural diplomacy should be used as a vehicle for uniting people, adding that Kenya sees its neighbours not as threats but allies in development.

The Head of State commended the traditional leader of the Degodia community for spearheading peace, unity and understanding in the region.

In honour of his role in ensuring cross-border peace and unity in the region, the President bestowed on King Abdi with the Elder of Burning Spear (EBS) award, one of the highest national honours.

Also present at the meeting were Head of Public Service Joseph Kinyua, Ethiopian Ambassador to Kenya Meles Alem Tikea and CAS Mohamed Elmi among others.