Amid political tension, Raila and Ruto meet in Kisumu 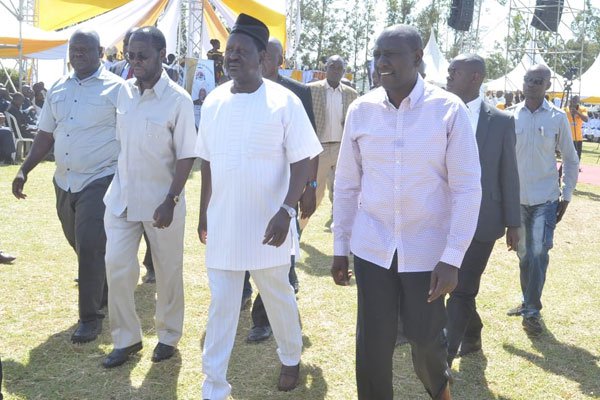 By NATION TEAM
More by this Author

Amid heightened political tensions in the ruling coalition over 2022 plans, Deputy President William Ruto and ODM leader Raila Odinga shared a podium in Kisumu on Saturday.

The two joined Catholic Church members at Uzima University grounds for the installation of Homa Bay Bishop Philip Anyolo as Archbishop of Kisumu.

Others who attended the ceremony were Bungoma Senator Moses Wetang’ula (Ford Kenya); Cabinet secretaries Eugene Wamalwa (Devolution) and Raychelle Omamo (Defence) and a host of legislators.

Rev. Anyolo, chairman of the Kenya Conference of Catholic Bishops (KCCB), took over from Archbishop Zacchaeus Okoth who is retiring.

Mr Odinga and Mr Ruto went to Kisumu barely a month after they and President Kenyatta attended the launch of the pilot Universal Health Coverage programme.

Political talk was expected to take centre stage at the religious function as DP Ruto and Mr Odinga’s lieutenants have torn into each with accusations concerning the next presidential election and Mr Odinga’s handshake with President Uhuru Kenyatta.

Mr Odinga’s allies, who include ODM chairman John Mbadi, have accused the DP of using proxies to fuel claims that President Kenyatta has neglected his Central Kenya backyard and turned his focus to opposition zones.

Those allied to Mr Ruto came out guns blazing and told off their ODM counterparts for “poking their noses” into Jubilee affaris.

They said the party is nation and has better structures than ODM so Mr Odinga should concentrate on their internal issues.

Soy MP Caleb Kositany described the Orange party as a “dictatorship and a family unit”.

“We have no time for pettiness. ODM has a lot of problems. It is a pure dictatorship and a family unit so let them deal with their own issues and leave alone Jubilee which is a national party,” he said.

He went on: “Even if Jubilee is fighting, how does it benefit them? They have more problems in ODM than they think we have in Jubilee. They should leave us alone.”

“The deputy president has pronounced himself on the matter of development in the country. He always speaks his mind; he doesn’t need anyone to speak for him. It is in [the] public domain [that] those who made contrary remarks are elected leaders who are known,” he said.

“But there are a few who want to twist this matter for cheap political gain. The deputy president respects and is loyal to his boss, the President. Any other view from political brokers is false, malicious and spurious and should be treated with contempt.”

F.B.I. Opened Inquiry Into Whether Trump Was Secretly Working on Behalf of Russia