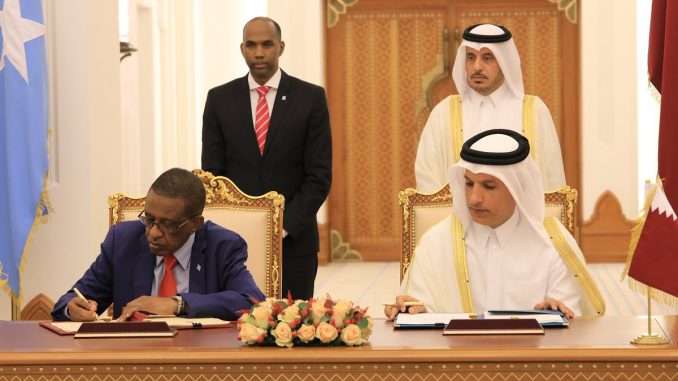 MOGADISHU – Somalia and Qatar have jointly signed a numberof agreements and memorandum of understanding (MoUs) on Thursday  at the Amiri Diwan in Doha.

The ceremony was attended by Somali PM Khaire and his delegation and senior officials from Qatar.

Al-Thani pointed out that the visit will contribute to supporting and developing co-operation between Somalia and Qatar.

1. An agreement on avoidance of double taxation and prevention of fiscal evasion.

2. An agreement on encouraging and protecting mutual investments.

3. An agreement on maritime transport.

4. An agreement on economic, trade and technical co-operation.

5. An MoU on co-operation in the field of ports.

7. An MoU on the establishment of a joint supreme committee.

The Proposed Horn of Africa Economic Integration: A Guide for the Perplexed