WHAT IS SAUDI ARABIA UP TO IN THE HORN OF AFRICA? 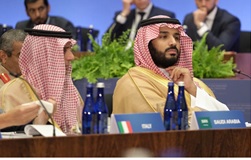 By James Jeffrey, The American Conservative

The relationship between the United States and its longtime staunch ally in the Horn of Africa, Ethiopia, is on shifting ground. Why? Largely because U.S. foreign policy is focused less on the global war on terrorism and more on political and economic threats from the likes of China and Russia.

Since 2001, and as the fight against terror developed, the United States and Ethiopia have forged a strong bilateral relationship based largely on the latter’s large professional and capable army and ability to project both hard and soft power regionally.

In recent years, however, especially during the Trump administration, the U.S. has gradually come to perceive its biggest threats in Africa to be the presence of China and Russia rather than terrorism.

“Great power competition, not terrorism, is now the primary focus of U.S. national security,” Secretary of Defense James Mattis said in a January speech that outlined the 2018 National Defense Strategy. “We face growing threats from revisionist powers as different as China and Russia are from each other.”

The implications of this could both feed into and be affected by the fact that the Horn of Africa has suddenly found itself embroiled in a new cold war brewing in the surrounding Gulf region. That conflict has pitted Saudi Arabia and the United Arab Emirates (UAE) against their bitter adversaries Qatar and Turkey.

This power struggle—driven by that age-old combination of rivalry and a desire to control the Suez Canal—isn’t necessarily a bad thing in itself. It could benefit the region’s benighted economies and has already achieved notable gains in terms of peace and stability, primarily with the opening of the Ethiopia-Eritrea border after 20 years of animosity and conflict. But the spider’s web of geopolitics could also unleash dangerous forces.

“U.S. policy is shifting and new powers are emerging,” says Hallelujah Lulie at Amani Africa, an Africa-based policy research, advisory, and consulting think tank. “There are all these rivalries, Iran versus Saudi Arabia, Saudi Arabia versus Qatar, Egypt versus Turkey, Turkey versus Saudi Arabia; interests over the Red Sea and Yemen; economic influence as a proxy; while Saudi Arabia is an ally of the U.S.: it’s a complex battleground.”

The tempo cranked up in 2017 when Saudi Arabia initiated an Arab nation blockade of Qatar. Both countries and their respective allies then descended on the Horn, where they rushed to build military bases, sign defense pacts, and take over commercial ports.

Ethiopia, which now has Africa’s second largest population and increasing diplomatic and commercial clout, has been dealing with meddling foreigners for the past two centuries. It has has proven adept at playing nations off against each other and switching allegiances to suit itself, a process that’s usually involved the U.S. in some manner.

During the reign of Emperor Haile Selassie, Ethiopia forged strong ties with the United States. But after a military coup overthrew the emperor in 1974, it pivoted to Russia. After the next revolution in 1991, it was back with the U.S. After 9/11, the partnership only deepened.

But over the past few years, the Ethiopian government, belayed since 2015 by ongoing protests and internal squabbles within its ruling party, took its eye off of the bigger picture outside Ethiopia. The result was that it failed to prepare itself for America’s shift away from the war on terror and towards China. For one thing, Ethiopia continued to accept enormous Chinese investments in infrastructure and to forge economic and diplomatic ties with Beijing.

The result was that the Ethiopian government suddenly found that the United States wasn’t offering as steadfast diplomatic support as it had been. That meant it wasn’t as willing to look the other way when protests were suppressed and human rights controversies made news. It became increasingly susceptible to its inner frictions and thereby less stable and sure of itself.

At the beginning of 2018, Prime Minister Hailemariam Desalegn resigned—the first Ethiopian leader to voluntarily cede power—in an effort to placate criticisms of his party and calm the turmoil gripping his country. A week after Desalegn’s replacement, Abiy Ahmed, took office, the U.S. House of Representatives unanimously adopted resolution HR-128, a resolution unusually outspoken in its condemning of various human rights abuses under the Ethiopian government.

Some say the shift in America’s relationship partly explains why Ethiopia has been increasingly drawn into the orbit of the Saudi-UAE bloc. Abiy Ahmed’s first official visit outside Africa in May was to Saudi Arabia, followed by meetings with UAE’s rulers.

“States on the Horn such as Ethiopia are trying to leverage these rapidly changing geopolitical dynamics to enhance their own influence,” says Awol Allo, a UK-based law professor and frequent commentator on Ethiopia and the Horn, writing for the website African Arguments. “Amidst the growing competition for influence among the Middle Eastern axes, Addis Ababa has managed to avoid taking sides—at least publicly—and leverage its geostrategic significance as the region’s hegemon to attract much-needed investment from several different partners.”

Despite this, according to staff at the U.S. embassy in Addis Ababa, America remains committed to Ethiopia “more than ever” for a multitude of reasons. Ethiopia is the largest contributor to UN peacekeeping missions globally, hosts one of the world’s largest refugee populations, plays a critical role in maintaining regional stability, and has enormous economic potential.

“The reform process launched by Prime Minister Abiy opens the door for further progress and collaboration in all of these areas, not least because democracy and good governance are powerful factors in building political stability and economic prosperity,” says a diplomat at the embassy. “Far from drifting away from Ethiopia, the U.S. is moving closer as we see a clear alignment in our priorities.”
The Ethiopia-Eritrea rapprochement is a good example of such an alignment between local and international players: both the U.S. and Saudi Arabia played a significant role behind the scenes in getting the formerly hostile sides to talk to each other. The peace and security dividend has some saying the Horn could finally come out of its decades-old shadow of conflict and suffering. Eritrea has also signed declarations of peace and cooperation with Djibouti and Somalia. After years of hostility over the building of the Renaissance Dam on the Blue Nile, Ethiopia and Egypt have seen a significant improvement in relations. Sudan, too, has mended relations with Egypt and has managed to get American sanctions lifted.

But such geopolitical developments are not lost on the citizens of the affected countries. Both Ethiopians and Eritreans are fearful of the potential consequences of being caught up in the ensuing struggle for influence in the region. They’re also worried that their respective governments could neglect their duties in their haste to comply with powerful external sources that opt for brinksmanship without considering the consequences for the still vulnerable states in the region. The Horn, after all, has a history of minor frictions mushrooming into far bigger problems.

“[Ethiopia] is engaged in a dangerous game,” Awol says. “The combination of the Gulf’s transactional politics and Africa’s often kleptocratic leadership could prove treacherous as historic rivalries take on new twists and matters develop beyond the Horn’s control.”