Sawa: The Platform for Youth Development and Empowerment 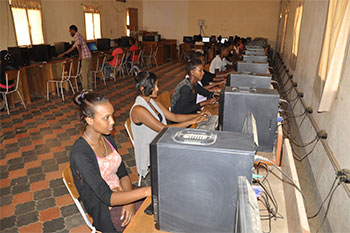 I am writing this article on in the early morning, well before the sun will rise. The birds are beginning to sing their beautiful songs. They are perched on the lemon trees which dot the landscape in Sawa.

Every day, Sawa is warmed by the national song of Eritrea which is passionately sung by the institution’s thousands of students. Unlike the cities and villages across Eritrea, where days are welcomed by church bells or calls from the muezzin, in Sawa every day begins with a rendition of the national anthem.

Young students need a lot of support. Although one can provide them with educational and other materials, there are certain things students require that cannot be bought or easily provided. It is in this context that Sawa is so important. It instills in youth important principles and values, such as humility, hard work, honesty, tolerance, selflessness, cooperation, and perseverance.

Sawa is a unique place where ambition, patriotism, and loyalty are infused into young Eritreans. My own observations of Sawa, both as a young student and teacher, is that the lessons it provides cannot be learned at other places. The hearts, minds, and souls of tens of thousands of young people become united by a common cause. I regularly witness and feel the cohesion and unity, which can sometimes be difficult to adequately express in words.

Sawa and national service are the lifeblood of our nation. They protect our independence and sovereignty. They keep us safe from external threats. And they are fundamental to creating a cohesive national identity and rebuilding the country. Sawa is often misrepresented as a simple military training camp. In fact, it is an educational institution that prepares our youth to take control of the future and fulfill their great responsibilities.

Currently, Warsay Yikealo Secondary School is home to about 14,000 students. They are completing the 12th grade and preparing to take the national matriculation exam. As well, the Center for Vocational Training hosts another 2,000 students distributed between 15 different departments. President Isaias Afewerki once stated that “Sawa represents and personalizes the continuation of the nation-building process that commenced during the liberation struggle. Sawa is the reincarnation and continuation of nation-building and is by no means a strange phenomenon in our history.”

In Sawa, everyone is ambitious. Ambition drives everyone to be their best and it keeps them in motion. Without ambition, one starts nothing. Without work, one accomplishes nothing. Thinking and aiming big are said to be important to achieving anything worthwhile.

Today, many societies are marked by violence, greed, theft, addiction, terrorism, and other negative things. In many places, youth lack discipline and morals. They do not obey rules and they disrespect their culture and history. It is common to hear how young generations have become self-centered and focus on serving their interests. Sawa seeks to combat these harmful trends by teaching our youth about their history and culture, as well as instilling youth with important values and principles.

In Sawa, everyone quickly learns their duties and begins to carry them out with extraordinary commitment and determination. During the armed struggle, commitment and determination were what transformed the dream of independence into reality. In Sawa, teamwork, wefera, or maetot are common. As well, many group activities are accompanied by motivational songs, referred to as moral. Teamwork is the ability to work together toward a common vision. It’s a way of doing things that directs individual efforts toward larger group or organizational goals. Teamwork, along with commitment, allows enabled young students to achieve great accomplishments. For the leaders of tomorrow, teamwork, leadership, empathy, and responsibility are a must. Learning and mastering these skills are crucial to succeeding in a competitive world.

Currently, Sawa is filled with the students of the 32nd round. Every round of students that enrolls in Sawa leaves its own unique footprint. Most of the infrastructure in Sawa was built by the students. Some rounds cleared areas, others put in place foundations, some gathered and prepared materials, while others erected and finalized the structures. The dozens of residence blocks, the roads, the classrooms and workshops, the water pipes and electrical lines, and the large stages used for seminars and graduation were all built by Eritrea’s youth. Members of every round have proved themselves as agents of change. In this case, change is understood as the process of shifting attitudes, values, and behaviors to address existing problems in a positive way.

In Eritrea, the major cities, including Asmara, are legacies of the Italian colonial period. Sawa, on the other hand, was developed after independence. Moreover, it is the only city that was constructed purely by Eritrean ideas and labor to serve Eritrean interests. Sawa is filled with an array of modern infrastructure: an airport, water and sewage system, electricity, carefully designed streets, health facilities, shops, recreation facilities, hotel, communication and transportation services, schools, and more.

Sanitation is important to the proper functioning of a city. Asmara’s cleanliness is part of what make it one of the most beautiful cities in Africa. In terms of sanitation, Sawa is the only city that compares to Asmara. In Sawa, much attention is paid to sanitation. In fact, it is rare to find litter on the ground. Sawa is checked and cleaned in the morning and in the evening, helping to ensure it is spotless and orderly.

The organization and discipline that are a feature of Sawa are rare in other parts of Eritrea. Every single minute matters and students quickly come to realize the importance and value of organization, discipline, and time management. The schedule is challenging and structured, with block of time set aside for classes, studying, physical exercise, cleaning and sanitation, eating, washing, playing, rest, and relaxation. In my humble opinion, elements of this approach would have great benefits for other parts of our country.

According to official records, female enrolment in Sawa has gradually increased. In the current academic year, about 51% of the 14,000 enrolled students are female. During the opening ceremony of the 2018/2019 academic year, the director of the school, Memhr Kelit Ghirmay, stated that over the years, more than 200,000 students have enrolled in Warsay Yikealo Secondary School. The members of the 32nd round come from 104 secondary schools from across Eritrea. Students are organized into 200 classes. Hundreds of instructors are assigned to teach various courses. Two large libraries are available for students and teachers. Outside of regular school hours, a peer education program has been organized. It is located within students’ residences. The 32nd round – also now known as the “Peace Round” – is now preparing for the national matriculation exam.

Importantly, various extracurricular activities, including sports competitions, cultural events, and seminars by guest speakers are offered to students. Notably, during the past three months, seminars on a number of different topics have been given by Memhr Kelit Ghirmay, General Filipos Weldeyohannes, Chief of Staff of the Eritrean Defense Force, Brigadier General Abraha Kassa, the head of national security, Saleh Ahmedin, Chairman of NUEYS, Fozia Hashim, the Minister of Justice, Luul Gebreab, the Minister of Labour and Social Welfare, and Mr. Mussa Naib. These diverse activities help to provide a well-rounded educational experience for students and also increase morale.

Sawa is much more than a school. It is where Eritrean youth are become responsible citizens. It moulds bodies and minds. It builds on our past and provides our youth with the tools to build the future. People go into Sawa as young individuals, but they come out as strong, disciplined, skilled citizens. Students in Sawa are the future of Eritrea. The young men and women who have learned and trained in Sawa are our country’s leaders of tomorrow. Our feature is bright and it is in their strong, capable hands.

Activities by Eritrean nationals in Diaspora