Activities by Eritrean nationals in Diaspora 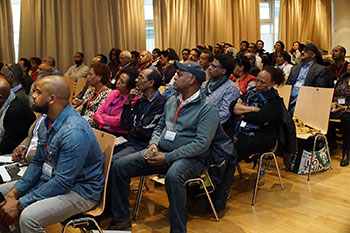 According to report, the national committee in Germany conducted congress on 24 November in Frankfurt in which representatives from more than 26 national committees across Germany as well as other invited guests took part.

Speaking at the congress that was conducted under the theme “National committees for Organizing and Integrating Eritrean Citizens”, Dr. Tesfai Ablelom, chairman of the organization, said that the congress is being conducted at the time of lifting the unwarranted sanctions imposed on Eritrea and that will have significant contribution in outlining viable implementation activities.

The Charge d’Affairs at the Eritrean Embassy in Germany, Mr. Yohannes Woldu said that the new era prevailing in the region is the result of the steadfastness and resilience of the Eritrean people and called on the nationals to strengthen participation.

The congress also conducted extensive discussion on the activities of the committee and elected executive committee.

Likewise, the Board and executive committee of the National Union of Eritrean Women branch in Europe held its annual meeting from 29 November to 2 December in Frankfurt.

The meeting was attended by Ms. Tekea Tesfamicael, President of the NUEW, Mr. Yohannes Debas, and Eritrean Consul in Germany as well as executive committee members from Denmark, Germany, Holland, Italy, the UK, Norway, Sweden and Switzerland.

In the same vein, Eritrean nationals in Kuwait organized program in connection of the lifting of sanctions that has been imposed on Eritrea under the theme “The Unwarranted Sanctions Foiled through Our Unity and Resoluteness”.

Sawa: The Platform for Youth Development and Empowerment